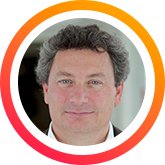 Gilles Salles, MD, PhD, is professor of Hematology and Medicine at the University of Lyon, and Head of the Department of Hematology at the Hospices Civils de Lyon, Centre Hospitalier Lyon-Sud, in Pierre-Bénite, France.

Professor Salles obtained his MD, as well as his PhD in differentiation, genetics, and immunology from Claude Bernard Lyon-1 University. He completed further training in oncology and also worked as a researcher at the Dana-Farber Cancer Institute of Harvard Medical School in Boston, Massachusetts, USA.

For more than 20 years, Professor Salles has been especially interested in the clinical and biological study of lymphoma. The primary focus of his work is on the description and validation of prognostic factors and clinical trials in indolent lymphomas.

His research team, “Clinical and Experimental Models of Lymphomagenesis,” at the Cancer Research Center of Lyon, is examining several aspects of lymphoma biology: T- and B-cell models, signaling, genomic biology of the splenic marginal zone, and prognostic factors.

Previously, Professor Salles chaired the Scientific Committee of the Adult Lymphoma Study Group and is now the chair of the Lymphoma Study Association, a European cooperative group. He is also a member of several international societies, including the American Society of Hematology.

Professor Salles is the author of more than 300 publications, including articles in international peer-reviewed journals such as Blood, Journal of Clinical Oncology, The Lancet, Haematologica, Lancet Oncology, and Leukemia and Lymphoma

We may request cookies to be set on your device. We use cookies to let us know when you visit our websites, how you interact with us, to enrich your user experience, and to customize your relationship with our website.

Click on the different category headings to find out more. You can also change some of your preferences. Note that blocking some types of cookies may impact your experience on our websites and the services we are able to offer.

These cookies are strictly necessary to provide you with services available through our website and to use some of its features.

Because these cookies are strictly necessary to deliver the website, you cannot refuse them without impacting how our site functions. You can block or delete them by changing your browser settings and force blocking all cookies on this website.

These cookies collect information that is used either in aggregate form to help us understand how our website is being used or how effective our marketing campaigns are, or to help us customize our website and application for you in order to enhance your experience.

If you do not want that we track your visist to our site you can disable tracking in your browser here:

We also use different external services like Google Webfonts, Google Maps and external Video providers. Since these providers may collect personal data like your IP address we allow you to block them here. Please be aware that this might heavily reduce the functionality and appearance of our site. Changes will take effect once you reload the page.